Overly nearly 200 years, the Bengal Club has hosted many memorable events, and simultaneously witnessed both glorious and tragic milestones.

In British India, the Club welcomed several high-ranking royals with impressive banquets. The visits of two Princes of Wales (Prince Albert Victor in 1890 and the future King Edward VIII in 1921) were especially significant and accompanied with much pomp and pageantry. On the latter occasion, the Club was among a set of buildings in Calcutta chosen to be illuminated with electric lights. The Prince was presented with a silver “Aagdan” and, in turn, presented the Club with a signed copy of his photograph. In 1927, the Club celebrated its centenary with a grand banquet. The Chief Justice of Bengal was in attendance, as were Sir Thomas Catto (chairman of Andrew Yule and later Governor of the Bank of England) and Sir Norman Murray (Governor of the Imperial Bank of India). A toast was raised to the health of the King of England. The following day, over 400 ladies were given a tour of the Club, then an exclusively male bastion. 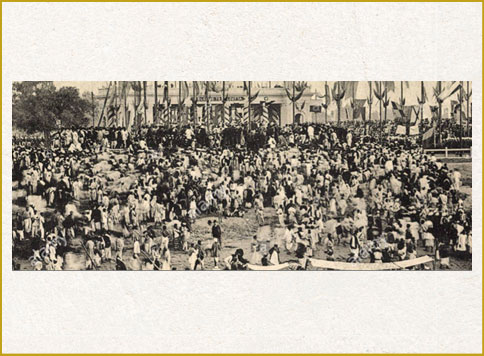 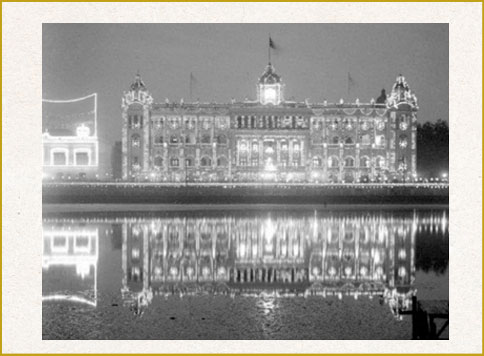 The Club illuminated during the visit of the future King Edward VIII, in 1921 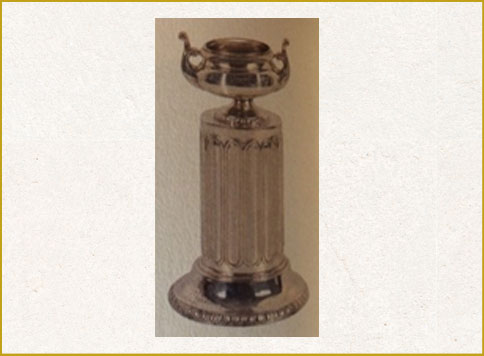 Geoffrey Moorhouse has referred to the Bengal Club as "the supreme unofficial headquarters of the Raj". An interesting example comes from the visit of the members of the contentious Simon Commission, in 1929. The members visited the Club and met with Committee members over dinner. Each member was seated at a different table. The Club’s president that year happened to be the Chief Justice of the Calcutta High Court, Sir George Rankin. One can only imagine profound discussion taking place. 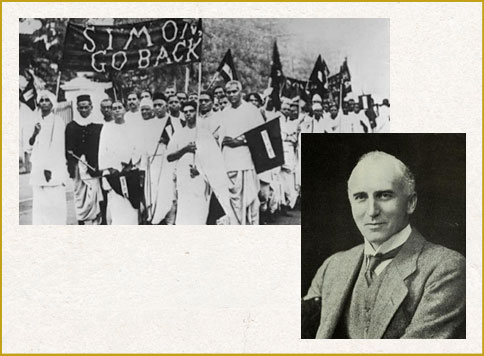 In 1929, Sir John Simon and other members of the contentious Simon Commission dined with the Club’s Committee members. The first half of the 20th century also witnessed two of the Club’s bleakest periods, courtesy the World Wars. Over a hundred members of the Club served in the First World War. Two were awarded the Victoria Cross (Lieutenant-Colonel Arthur Martin Leake, an army physician, and Lieutenant Colonel Sir John Reginald Noble Graham), but several also lost their lives, their names now inscribed on a plaque. During the Second World War, the Club suffered from shortages of supplies, financial strife and an overall atmosphere of gloom and panic, exacerbated after the aerial bombing of Kolkata by Japan, which killed hundreds. Nevertheless, the Club endeavoured to maintain the high reputation of its hospitality and cuisine with the proverbial stiff upper lip, welcoming generals and servicemen who would eventually become some of the most legendary figures in military history. The Club also granted temporary honorary membership to over a thousand senior military officials who were stationed in Calcutta in the course of the War. Sir William Slim, later Governor-General of Australia, was one such military visitor. 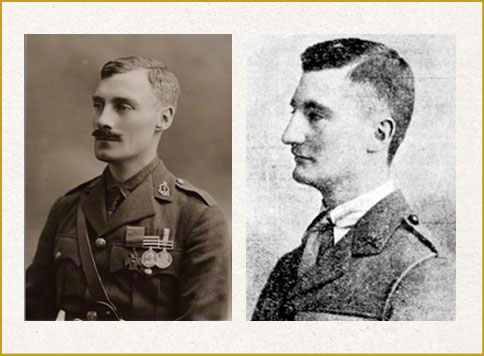 Arthur Martin-Leake and JRN Graham, recipients of the Victoria Cross during World War I 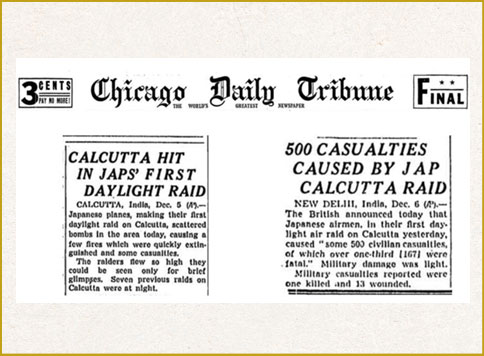 News report of the bombing of Calcutta in 1943 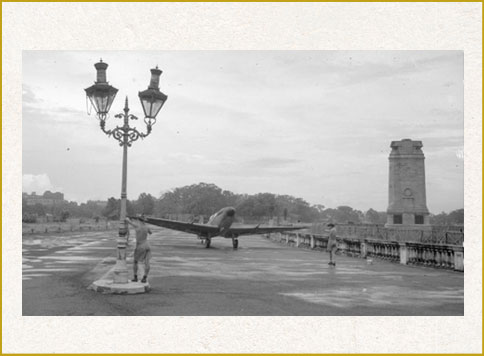 A Royal Air Force place taking off from a street in Calcutta, not far from the Bengal Club 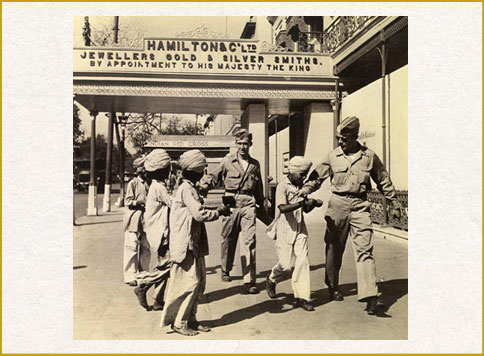 While not traditionally regarded as a sporting club, the Bengal Club, since inception had provision for indoor sports like bridge, chess and billiards, with rules providing that players could play for points in gold mohurs and play could take place until midnight. The Club also boasted of some competent indoor sportsmen in British India. Notably, the Hon’ble Robert Steel, president of the Club in 1889, was described by the Times of India as "probably the finest chess player India has ever seen". The first World Chess Champion, Wilhelm Steinitz dedicated his book The Modern Chess Instructor to Steel, credited Steel with inventing a new variation of the Giuoco Piano opening, and claimed elsewhere that Steel had defeated him and other first-rate players in some unrecorded games using the variation. In 1880, Steel organised a telegraphic chess match between the Calcutta Chess Club and the Liverpool Chess Club (of which he was a former President). The match is believed to be the first long-distance intercontinental chess match, and moves were shared via telegram. The Calcutta team was supposed to be captained by Steel and include two Indian players and an Anglo-Indian player, but Steel left India midway and the Calcutta team lost. Another interesting anecdote concerns John Roberts Jr.,a British billiards player of considerable distinction. Roberts played several matches in India during a world tour in the 19th century. Roberts wrote that he played Justice Morris of the Calcutta High Court (a member of the Bengal Club) at the Club, in a “most keenly contested” match. Morris won the game by around 100 points. However, Morris was also given a generous handicap of 700 points (the target being 1,000 points). Moving from indoor sports to indoor hobbies, one milestone that the Club can boast of is the hosting of the first adjourned general meeting of the Philatelic Society of India, on 20 March 1897. 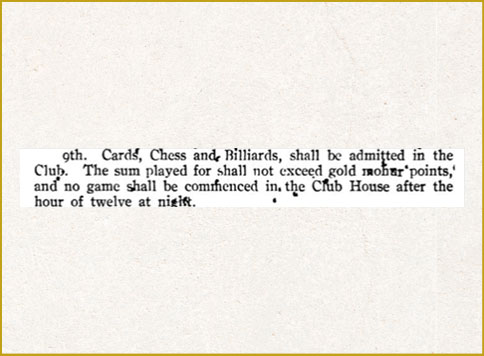 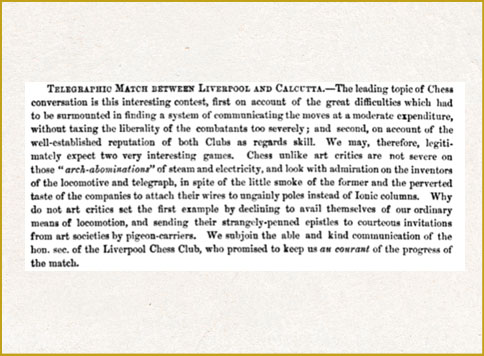 Robert Steel, President of the Bengal Club in 1889, organised a telegraphic chess match between players in Calcutta and Liverpool, believed to be first long-distance intercontinental chess match. The Chess Monthly magazine referred to the game as “the leading topic of Chess conversation”. 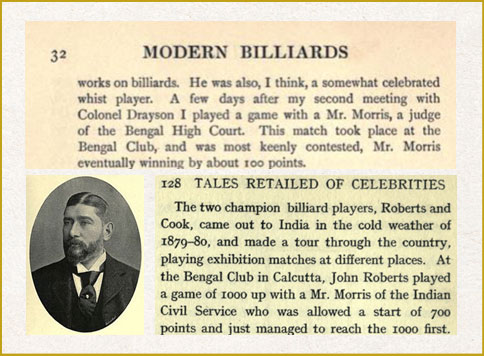 The champion billiards player John Roberts Jr. (pictured) played Justice Morris of the Calcutta High Court in an exhibition match at the Bengal Club. Morris defeated Roberts by over a 100 points (but with the benefit of a generous handicap). 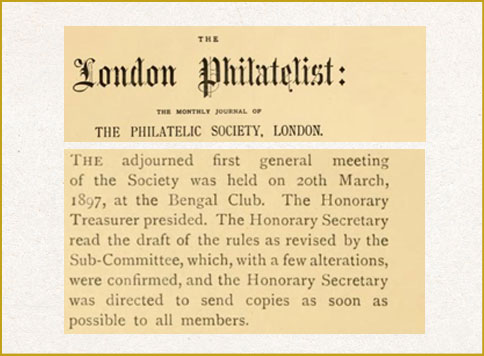 The Bengal Club hosted the first adjourned general meeting of the Philatelic Society of India, in 1897.

In independent India, Prime Minister Jawaharlal Nehru and Governor-General Chakravarti Rajagopalachari were among the first notable Indian political leaders to visit the Club. Rajagopalachari later advised the Club to retain the “Bengal Club” name, amidst discussion over whether the division of Bengal into East Pakistan warranted a change of name.

Chakravarti Rajagopalachari and Jawaharlal Nehru visited the Club (separately) in independent India. Rajagopalachari advised the Club to retain the word “Bengal”. Prince Philip, during a visit to the Club in 1959, apparently rebuked the Club for its race-based admission policy and joined the chorus seeking its removal.

The celebration of the Club’s 150th anniversary, in 1977, was a fairly lavish event. The then British High Commissioner to India, Sir John Thomson, and the then Governor of West Bengal, AL Dias, were guests of honour at a banquet. A Gurkha Regiment band was one of the attractions of the evening. A menu card from the celebration shows that the Club was mindful of its British legacy (two former British past presidents were invited to raise a toast) but also conscious of its post-colonial identity (a toast was raised to the President of India, rather than the British monarch). The dishes served at the event were named in honour of past presidents of the Club, both Indian and British. Meanwhile, several distinguished personalities from India and overseas visited the Club. According to senior journalist Sunanda K. Datta Ray, Prince Philip, during a visit to 1959, gave the Club a “tongue-lashing” and asked it to remove its race-based admission criteria (which happened the same year). 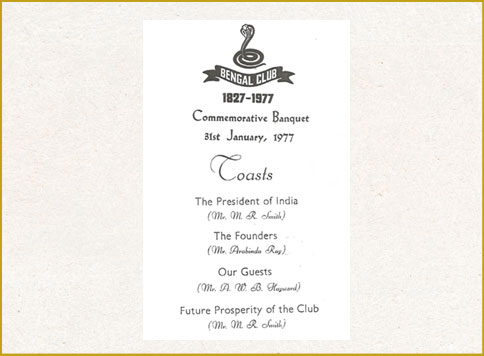 In 1989, on the 300th anniversary of the city of Calcutta, the Club inaugurated a room (Room 3oo) dedicated to key figures of the Bengal renaissance, such as Raja Ram Mohan Ray, Ishwar Chandra Vidyasagar and Dwarakanath Tagore (who was blackballed from membership of the Bengal Club). The room was inaugurated by the then communist Chief Minister of Bengal, Jyoti Basu. The event signified just how greatly the character of the Club had changed in post-colonial India! 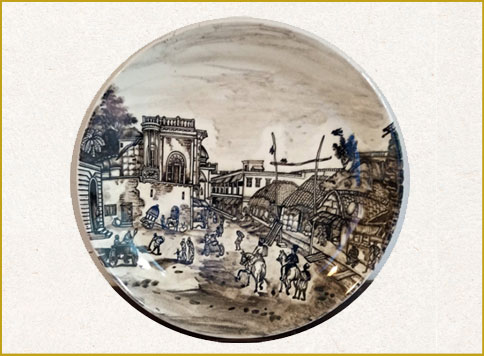 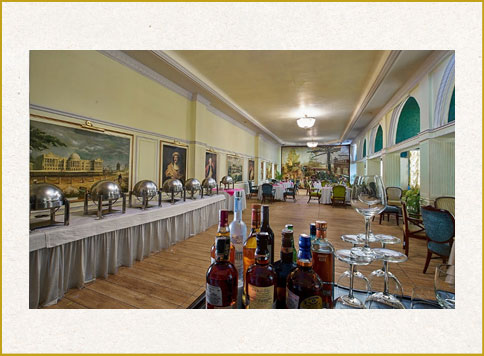 In 1989, the inauguration of Room 300 (containing portraits of 19th century Bengali reformers and intellectuals, and inaugurated by communist Chief Minister Jyoti Basu) marked a clear break from the Club’s imperialist past.

In the present century, the Club has been selected to host many important cultural events. In 2004, the Club hosted the award ceremony for the prestigious Commonwealth Writers' Prize (Europe and South Asia region). The Prizes for Best First Book and Best Book and were respectively won by The Curious Incident of the Dog in the Night-Time by Mark Haddon and A Distant Shore by Caryl Philips. The Club has further served as a venue for the Tata Steel Kolkata Literary Meet, one of India’s major literary events. The Club also launched an annual lecture in memory of the former Indian cricket captain Tiger Pataudi (whose speakers have since included some of the greatest cricketers of all time), a Library Talk series (whose speakers have ranged from Nobel laureates to sporting legends), to an annual panel discussion on national politics (typically featuring Members of Parliament from the ruling party and opposition). In a departure from previous eras, the Club has organised several musical events in recent years, featuring Indian classical, Western classical and jazz musicians. Performers have ranged from Grammy winners and nominees (such as Ustad Zakir Hussain, Pandit Vishwa Mohan Bhatt and Ustad Shujaat Khan) to local acts. Sadly, as life around the world came to a standstill during the Covid-19 pandemic, the Club was forced to shutter down during government-imposed lockdowns and cancel many scheduled events. The Club also lost some of its members to Covid during this period. Nevertheless, the Club did its best to spread cheer through a series of virtual concerts and talks, which were also made accessible to the wider public. Finally, the Club organises an annual quiz competition, an annual English play, and various indoor sports tournaments.

All the above images are understood by the Club to be covered by the fair dealing provision of the Copyright Act 1957. Should you wish to contact the Club in this regard, please email us at secretariat@thebengalclub.com