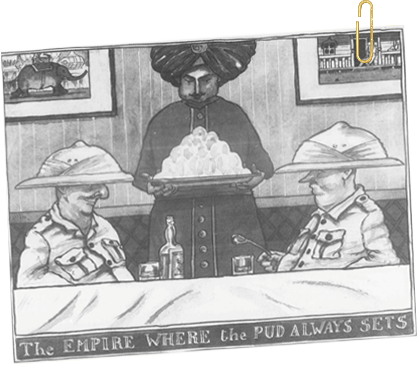 In the nearly two-hundred years of its existence, the Bengal Club has featured in scores of articles published in leading newspapers in India and around the world — ranging from news reports on royal visits to scandaloussociety gossip. Below is a selection of articles, going back to the 19th century.The dramatis personae in some of the articles played pivotal roles in the history of British India and the wider Empire (sometimes unwittingly). 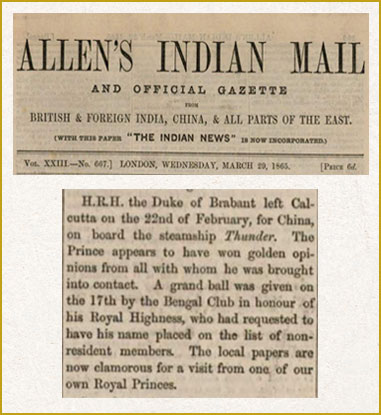 One of the earliest royal visitors to the Club was Duke Leopold of Brabant. The visit took placeless than seven months before he ascended the Belgian throne as King Leopold IIand became one of the most powerful monarchs in the world. The Duke’s visit was part of an extensive world tour, which was reportedly cut short after the death of his father, King Leopold I. According to a report in theAllen’s Indian Mail, the Club had hosted a grand ball in honour of the Duke. TheDuke had also requested to be madea non-resident (presumably honorary) member. The newspaper added: ‘The local papers are now clamorous for a visit from one of our own Royal Princes.’ The wish would indeed be granted, with various princesfrom the British royal family visiting the Club in the 19th, 20th and 21st centuries. 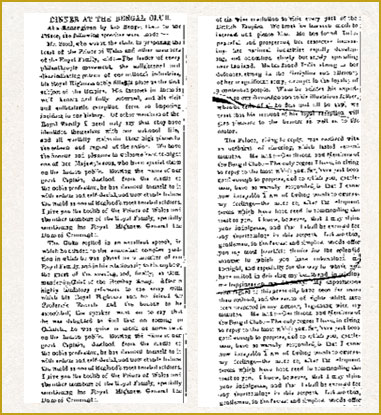 In January 1890, the Bengal Club hosted a dinner in honour of Prince Albert Victor (the eldest child of King Edward VII and grandson of Queen Victoria) during his visit to Calcutta.In his dinner speech, the Prince praised the ‘superb banquet’ and the sights he had witnessed at the ‘great city’ of Calcutta. Duke Arthur of Connaught, uncle to Prince Albert and son of Queen Victoria, was also present at the dinner and delivered a short speech. Prince Albert, later styled the Duke of Clarence and Avondale, was unable to become King as he died of pneumonia while still in his twenties. His younger brother, George V, thus ascended the throne. 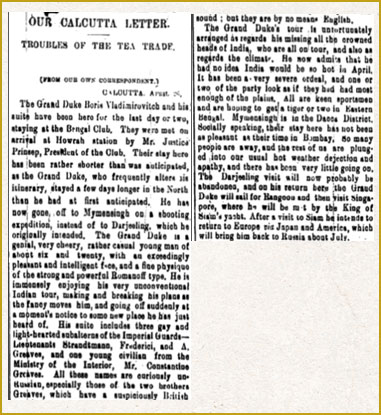 Visit and stay of Grand Duke Boris Vladimirovich of Russia

In 1902, Grand Duke Boris Vladimirovich of Russia, grandson of Tsar Alexander II, visited India for tiger hunting, at the invitation of the Maharaja of Kapurthala. The Grand Duke also visited Calcutta and stayed at the Bengal Club. The Times of India reported that the Grand Duke was received at the Howrah station by the then President of the Club, Mr Justice Prinsep of the Calcutta High Court. The report described the Grand Duke as ‘a genial, very cheery, rather casual young man’. The Grand Duke was imprisoned in later years, following the Russian Revolution, but managed to flee and settled in France. 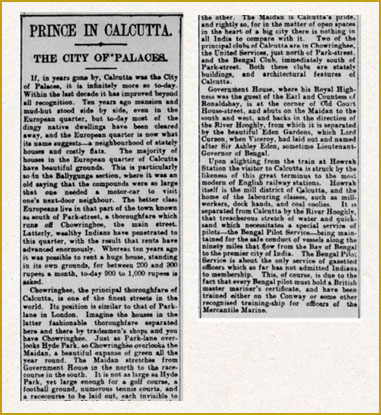 Three decades after Prince Albert Victor’s visit, the Club hosted another royal visitor to Calcutta, Prince Edward of Wales (later King Edward VIII and, after his infamous abdication, the Duke of Windsor). The Daily Telegraph, reporting on the event, described Calcutta as the ‘City of Palaces’ and stated: ‘Two of the principal clubs of Calcutta are in Chowringhee, the United Services, just north of Park Street and the Bengal Club, immediately south of Park Street. Both these clubs are stately buildings and architectural features of Calcutta. 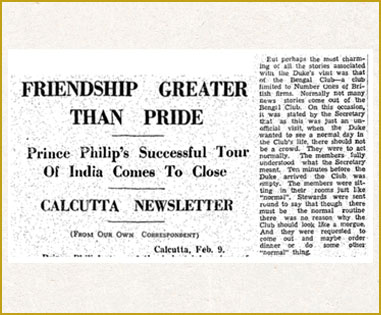 Visit of Prince Philip, Duke of Edinburgh, in 1959

Prince Philip, Duke of Edinburgh, visited the Bengal Club twice, first in 1959 and then in 1961. The South China Morning Post carried an unusual report about the former visit. Apparently, Prince Philip had wished to see a “normal” day at the Club. The club’s members were thus requested to make themselves visible to the Prince and performs “normal” tasks like ordering meals. 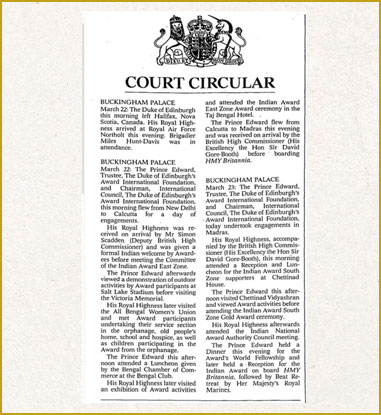 Visit of Prince Edward (presently Earl of Wessex) in 1997

In 1997, over half a century after Prince Edward of Wales’ visit, his namesake and the youngest child of Queen Elizabeth II (presently the Duke of Wessex) attended a luncheon in his honour at the Club. The event was hosted by the Bengal Chamber of Commerce. Several past Presidents of the Bengal Chamber, both British and Indian, have also served as President of the Club. 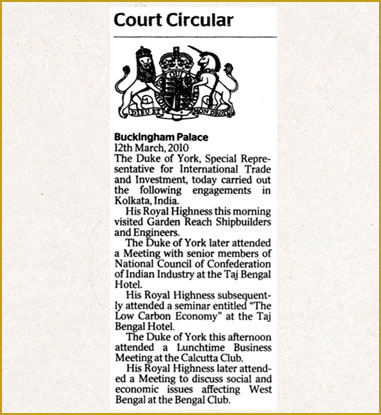 In 2010, the Club again had an opportunity to host a royal visitor. Prince Andrew, Duke of York, visited the Bengal Club to discuss social and economic issues affecting the state of West Bengal. He was visiting in his capacity as the UK’s Special Representative for International Trade and Investment. 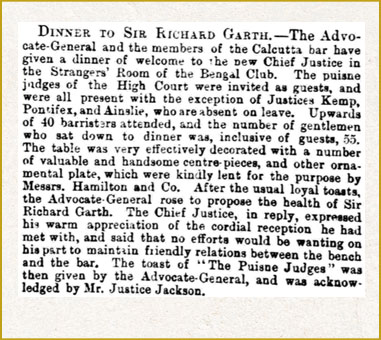 Dinner in honour of the Chief Justice of Bengal, Sir Richard Garth

In 1875, the Club hosted a welcome dinner in honour of Sir Richard Garth, the new Chief Justice of Bengal. The dinner was thrown by the Advocate General of Bengal and members of the Calcutta High Court Bar. In Britain, the Dictionary of National Biography praised Garth as a judge ‘popular with all classes of society’ whose ‘judicial decisions were marked by learning, patience, and practical good sense’. However, Garth’s reputation was arguably more controversial among Indians. He had infamously sentenced the nationalist leader Surendranath Banerjea to imprisonment after the latter had criticised a High Court judge, leading to much public resentment 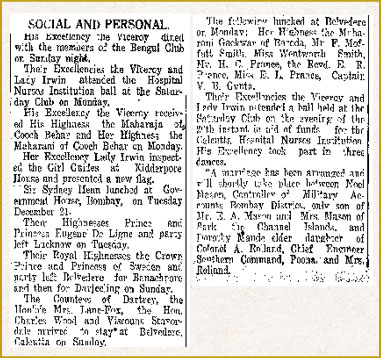 Dinner in honour of Lord Irwin, Viceroy of India

In 1926, the Viceroy of India, Lord Irwin, visited Calcutta and attended a dinner hosted in his honour at the Club. According to the Times of India, his itinerary was packed with social engagements. 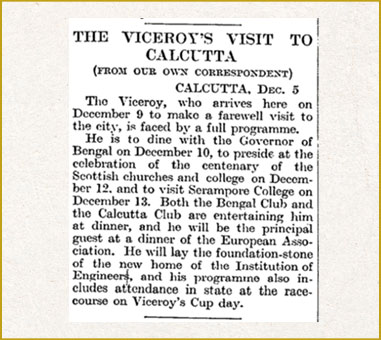 In 1930, Lord Irwin, made a farewell visit to Calcutta towards the end of his tenure and attended a dinner hosted in his honour at the Club. 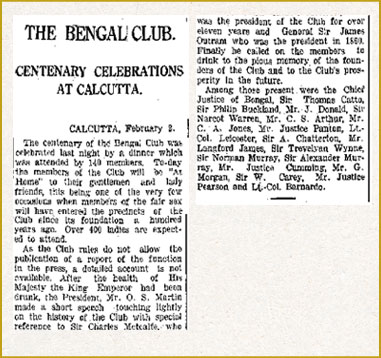 Celebratory dinner at the Club

In 1927, the Bengal Club marked its centenary year. According to the Times of India, a celebratory dinner was attended by 140 members. As the report noted, a toast was raised to the health of the King-Emperor and tributes paid to former Presidents Sir Charles Metcalfe and Sir James Outram. Those in attendance included the Chief Justice of Bengal and two fellow judges; Sir Thomas Catto (chairman of Andrew Yule and later Governor of the Bank of England); Sir Norman Murray (Governor of the Imperial Bank of India); and Sir Alexander Murray (President of the Bengal Chamber of Commerce. The following day, over 400 ladies visited the Club (‘this being one of the very few occasions when members of the fair sex will have entered its precincts’, the report noted). 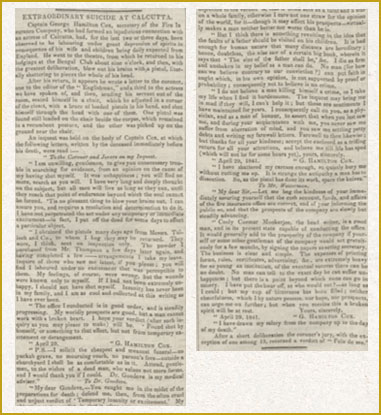 In 1841, the ghastly suicide of one Captain George Hamilton Cox — secretary of the Fire Insurance Company — was reported in several newspapers around the world. Cox had been lodging at the Club and shot himself in the head with a pistol in his room. The Westmorland Gazette, a little-known local newspaper in England, took a morbid interest in the incident and reproduced a number of suicide notes that Cox had written to acquaintances, as well as to the Englishman newspaper in Calcutta. Cox had reportedly ‘formed an injudicious connection with an actress of Calcutta’. One of his suicide notes read: ‘My worldly prospects are good, but a man cannot work with a broken heart.’ 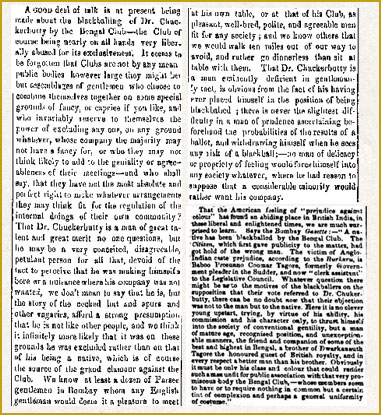 Reported in the Bombay Times and Journal of Commerce (Bombay), 19 May 1885 and the Sydney Morning Herald (Sydney), 8 October

In the 1850s, the Club’s infamous race-based membership policies became the subject of considerable controversy. Dr Soorjo Coomar Chuckerbutty — an eminent professor of medicine, the first Indian to pass the examination of the Indian Medical Service and one of the first Indians to be admitted as a member of the Royal College of Surgeons — let it be known that he had been blackballed from membership solely because of his race. The Sydney Morning Herald reproduced a report from the Bombay Gazette which condemned the insult to ‘a man of mature age, recognised position, and unexceptional manners’. However, the British-run Bombay Times and Journal of Commerce (the predecessor to the Times of India) stoutly defended the Club and attacked Chuckerbutty as ‘a man eminently deficient in gentlemanly tact’. Rejecting allegations of racial prejudice, the newspaper remarked: ‘We know at least a dozen of Parsee gentlemen in Bombay whom any English gentleman would deem it a pleasure to meet at his own table.’ Speculatively, Chuckerbutty may have dared to apply in the first place as he had married an English lady and converted to Christianity, and thus thought himself advantaged compared with other Indians. 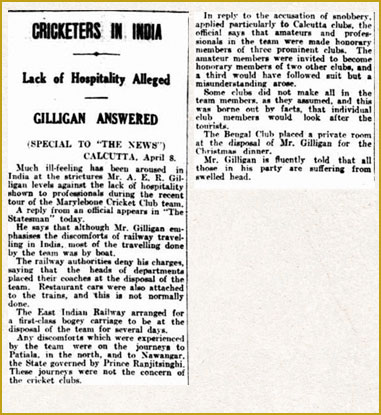 A number of foreign newspapers, such as The News in Australia, reported on the visit of an MCC XI, captained by former England captain Arthur Gilligan, to India — along with an ensuing controversy. Apparently, Gilligan had alleged inhospitable treatment, ranging from uncomfortable journeys to an ‘accusation of snobbery applied particularly to Calcutta clubs.’ The Statesman newspaper in Calcutta published an official rebuttal to the charges. It was counterclaimed that Gilligan had, in fact, been provided adequate comfort: The Bengal Club placed a private room at the disposal of Mr Gilligan for the Christmas dinner.’ It was thus contended that Gilligan was simply suffering from ‘swelled head.’ 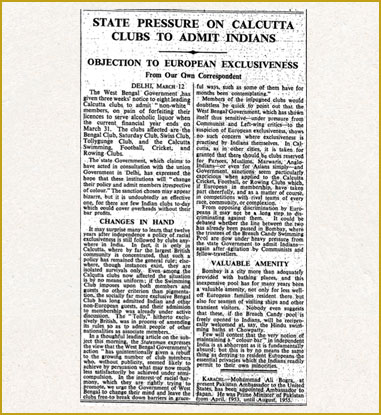 In 1959, the Times of London reported that the Government of West Bengal, after consulting with the union government in Delhi, was placing pressure on the Bengal Club (along with other colonial-era clubs in Calcutta) to end race-based membership policies. The government apparently threatened the clubs with the cancellation of their liquor licences. The report stated: ‘In fact, it is only in Calcutta, where by far the largest British community is concentrated, that such a policy has remained the general rule.’ However, the report also quoted the Statesman (then still edited by an Englishman) as being sympathetic to the clubs and urging that they be permitted to voluntarily dismantle their old membership policies ‘in graceful ways’ rather than by force. 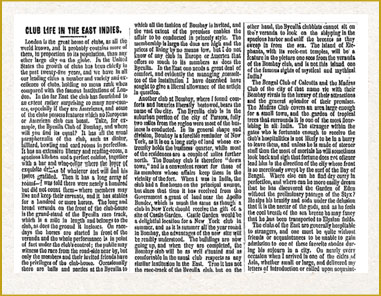 ‘Club Life in the East Indies’

The Daily Evening Bulletin, a San Francisco-based newspaper reproduced a column from the Philadelphia Times, introducing the club culture of India to American readers. The article remarked that while ‘London is the great home of all clubs’, and the United States was fast catching up, clubs in India had ‘flourished to an extent rather surprising to many newcomers, especially if they are Americans, and some of the clubs possess features which no European or American club can boast.’ The article observed that ‘the Bengal Club of Calcutta and the Madras Club of the city by that name vie with their Bombay rivals in the luxury of their attractions and the general splendour of their premises.’ 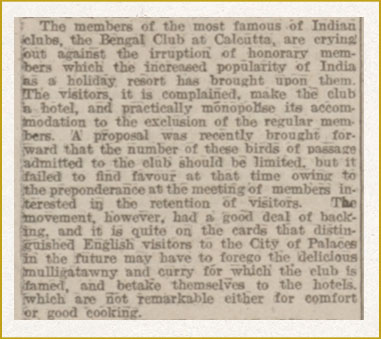 English visitors staying at the Club (a little too often)

In the late 19th century, the Nottingham Evening Post, in a section titled ‘Metropolitan Notes’ observed that members of the Bengal Club (‘the most famous of Indian Clubs’) were growingly increasingly annoyed at the trend of ‘distinguished English visitors’ to Calcutta, who were non-resident members of the Club, choosing to stay at the Club instead of hotels. These ‘birds of passage’ were alleged to be monopolising the Club’s facilities to the detriment of regular members stationed in Calcutta. 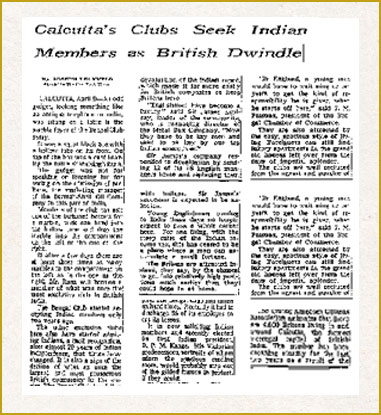 The Bengal Club began opening doors to Indian members in the mid-1960s. Shortly afterwards, the Club elected its first Indian president, Mr Dorab Pestonjee Maneckjee Kanga, Managing Director of the Calcutta Electric Supply Corporation. The news was featured in the New York Times. The report quoted Sir James Linday, Managing Director of the prestigious Metal Box Company in Calcutta, as saying that the number of English residents in Calcutta was steadily declining, although the report still pegged the number at 4,000.

The Bengal Club believes that its reproduction of the above news reports is permissible on the basis of the copyright subsisting in them having lapsed and/or on the basis that such reproduction falls within the fair dealing exception under section 52 of the Copyright Act 1957. The cartoon appearing at the beginning of the page accompanied the following article: Giles MacDonogh, ‘Blancmage: the last vestige of the raj’, Financial Times Weekend, 23/24 September 1995. The article referred to a number of British clubs in India, including the Bengal Club, and the cartoon was thus probably meant to depict a generic British club rather than the Bengal Club specifically. If you would like to communicate with the Club in connection with any of the above, please email us at secretariat@thebengalclub.com